SARANAC LAKE – As the new student representative on the North Country Community College Board of Trustees, Jessica Kemp said she plans to be a strong voice for students. 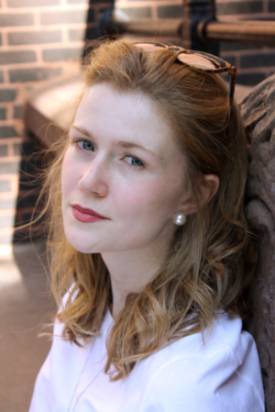 “My goal is to accurately represent the student body,” she said. “I think it’s important to be prepared and not afraid to speak up.”

Kemp, a student in the college’s Business Administration program, was elected by her peers this fall to serve as student trustee. She said her interest in seeking the position stems in part from her prior college experience. Kemp has a BFA in Stage and Production Management with a minor in Hearing and Deafness from Emerson College.

“There were elements of my first undergrad experience where I felt I wasn’t involved enough,” she said. “I went into the first semester at North Country saying, ‘You’re going to be involved.’ This is a chance for me to have a say in something. I can at least put my hat in the ring to try and effect change.”

As student trustee, Kemp said she’s working on ways to get to know the college’s diverse student body, which includes full-time and part-time students, both traditional and non-traditional, at three campuses. Currently, most students at the colleges are taking classes remotely due to the COVID-19 pandemic.

“Based on my experience and what I’ve heard about from other students, my biggest concern is how in this remote time do we keep up the quality of education the college is known for?” Kemp said. “How do we maintain student participation, academically and in student life? The quality of education is important to me and providing equitable experiences to all our students.”

Born and raised in Saranac Lake, Kemp grew up primarily in the performing arts -- dancing at the Lake Placid School of Ballet, performing in the local musicals, singing in the select women's ensemble, playing trombone in the jazz band -- and graduated as class salutatorian. After earning her BFA from Emerson, she worked in Boston at several theaters and worked her way up to Leadership Team Member at the Boston Ben & Jerry's franchise. She moved to New York City after her apprenticeship at Actors Theatre of Louisville to continue pursuing her stage management career. While there she worked at The Public Theater, Playwrights Horizons, and New York Theatre Workshop.

“I started thinking about lessons I had learned in college about how to manage finances in the theater industry, in an industry that doesn’t pay much,” she said. “I realized how uneducated many of my colleagues are, so I have this crazy idea of starting a business that focuses on financial education for theater artists.”

Kemp’s first meeting as student trustee was Oct. 30. Steve Reed, chair of the college’s Board of Trustees, welcomed Kemp and said he’s already impressed with her contributions.

“As a graduate of a four-year college, she brings unique perspective and experience,” Reed said. “At her first meeting, she contributed perceptively and articulately as we discussed the issues facing the college during these challenging times.”

“We are thrilled to have Jessica join the Board of Trustees,” said President Joe Keegan. “As Chairman Reed noted, Jessica’s experience is one that will serve our students and the College well. She understands what it means to be a new student, a returning student and a College Bridge student, and that lived experience will help inform her representation of students and her work on the board.”